“What does a Swede, a toaster and a gaelic stadium have in common?” No, it’s not a joke, it’s actually part of my Agile Lean Ireland experience on 26th April in Dublin. Here are my thoughts and what I took from the day...

But why did I go to the ALI conference?

In January 2018 I saw a 1-day agile conference announced in another country. Normally I wouldn’t travel too much to go to a conference, as it was a short distance from my family home, I thought “I’ll give it a go". That’s how I decided to go to Agile Lean Ireland. So apart from having an excuse to visit the family, was it worthwhile?

The fact that it was held in a gaelic football stadium, Croke Park, added a nice backdrop and the facilities were great. It was easy to get too while there were a couple of hotels close by. Dublin is also a good city to visit and there were at least 7 other people from Barcelona that I knew. I heard someone mention that they came to drink Guinness and happened to realise that there was an Agile conference at the same time although I can’t confirm that rumour :-) 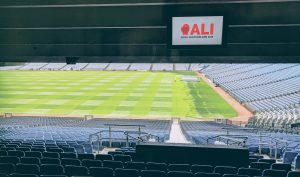 The format was different to what I am used to and while travelling to another country for 1 day may not always be viable, this worked out very well. When I’ve attended other conferences of 2, or even 3, days I’ve sometimes had the sensation of hearing the same thing over again and again. As it was a limited time frame, I think the organisers did a good job of balancing the number of tracks and talks. There was an Open Space section in the afternoon that allowed some speakers to further discuss their topic and in general people found the sessions useful. Open Spaces can be a hit or miss for me and I used the time to catch up with some people I hadn’t seen for several years, such as Hodei Iraola who was a volunteer at the event.

I managed to attend 10 talks throughout the day and enjoyed most of them. The event kicked off with Henrik Kniberg’s keynote of “Confessions of a Change Agent” which was created around prompt cards that look like this. I have to be honest in saying that it was the best talk during the day. I think that that Swedish guy with the toaster has done a talk or two and seems to know a bit about the whole Agile thing... 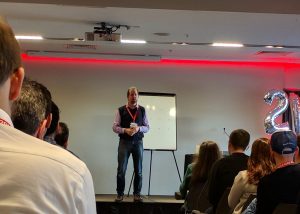 Henrik Kniberg before getting the toaster

Some of the things he mentioned were straightforward and simple, however they resonated a lot and helped me think about my work. At times I struggle with measuring the impact that I may have in an organisation and to hear him have those same doubts was useful.

Henrik talked about how as Change Agents, we see problems everywhere. It can be frustrating at times as the list grows and grows. We should be careful with our mental health as if you are constantly worried about fixing problems and the list is never-ending, anxiety and depression could creep up. It’s not often that we hear about our mental health at conferences, or in public in general, and it was refreshing to hear him warn of the dangers.

To combat the never-ending problems, take one at a time and

If it isn’t working, move onto another problem.

How do you know if you are doing a good job?

So if you walk about a company asking stupid questions, how do you know you are adding value?

“If you still have work and the company wants to keep you around, you are doing good”.

While there were many other great points, I chuckled at the card about Change Agents shouldn’t have big egos as I mentioned something similar during the CAS 2017 in Seville. However as I’ve just mentioned my talk about not having a big ego, what does that say about my ego? I think I’ve just entered into a recursive loop...

Other talks in Agile Lean Ireland

Next up was Nigel Baker and I enjoyed his brand of irreverent humour and sarcasm. In the Advanced Advancedness talk, amongst other things, he made me think about the focus on Advanced Scrum Master certifications. Do we place the advancement of Scrum Masters over the teams? If we have a hero Scrum Master, does that help the team? Don’t we look to promote self-organised teams?

Companies are always transforming and that we should stop using the word Transformation to describe what we are doing (any excuse to talk about Transformers I think). Also how Agile is about doing the simple things well just as Gordon “F-Word” Ramsey tells restaurants. It is better to have 5 great dishes than 50 rubbish ones. Tell that to McDonalds Gordon.

In the Efficiency to Effectiveness talk, Colm spoke about creating resilient organisations. Organisations that look to create a good level of both autonomy and alignment. He also mentioned his dislike for the word “empower” which if I had Facebook, I’d give a Like to. He also brought up an interesting statistic that only 1 in 5 employees  know what needs to be achieved in an organisation. As there are 4 of us in Drive To Improve, that does not bode well...

Stephen discussed how it’s all in the mindset of the executives, this is our biggest issue. This was aimed at a more corporate audience and as we work with companies of various sizes, it was good to have this point of view. Apart from introducing some books and models, I had never heard of the expression of imagine trying to explain water to a fish. I liked that a lot as it’s so simple yet effective.

I enjoyed Dominque’s take on creating an agile movement in JP Morgan. It was upbeat and gave me some good ideas. It focused on cultural hacking in a large transformation with cool points like :

Culture is the stories people tell

I also enjoyed hearing how they empowered the system and not the workers while providing facilitation training. It’s easy to say we need managers to act differently, but if they don’t know how? Finally, we got to see the shirtless guy dancing video and that’s always worth a smile.

I thought Gail did a great presentation about Agile Transformations. The metaphors used, her laid back style and the fact that she used the pink panther on various occasions made this a great talk. Key points included setting the vision and making sure the organisation knows what it wants to fix. Why do you want agile? She also mentioned the role of the Agile Coach and gave a pretty good definition (I have a strong confirmation bias here) about the differing “types” of roles - team, multi-team and enterprise. At the end she introduced an Agile Transformation Manifesto that promoted emotional intelligence/quotient (EQ) over intelligence quotient (IQ). I also liked the “System over Local” sentence in the manifesto.

I enjoyed Fin’s talk and learnt several things, but I honestly couldn’t help think of the classic Spanish phrase of “Yo he venido aquí para hablar de mi libro”, translates as “I’ve come here to speak about my book”. While he was discussing Flow (his book), at least he was incredibly honest in stating that he didn’t invent anything new, merely put models and thoughts into a coherent order and use them to improve how companies work. He reminded us of the importance of educating and helping the developers which often gets lost. I loved the PMO joke about someone setting a wedding date and then having to decide on who to marry...

The conference had a short space for various lightening talks and I enjoyed listening to several. The 10 minute format meant that the speakers had to really condense their message and focus on the key parts. I would have liked to have more of them!

Jeff Gothelf gave an interesting final keynote taken from his Sense and Respond book. He wove elements of product discovery, unpredictable behaviour from people and changing business needs into a story involving John Deere and their tractors. Also making a surprise cameo were some Ukrainian hackers.

I enjoyed hearing the phrase of how we should

“...build humility into how we work”

And while I’m not creating a product, it’s something I try to do, be humble in my work. Also he invited us to think how do we measure success. It was a good ending to the Agile Lean Ireland conference for me.

Highlights and thoughts from others who were there

I asked some of those people who travelled from Barcelona what they took from the conference and Paulius Tuzikas, Agile Coach in Typeform mentioned :

“...the highlight would be that instead of implementing organizational changes by ourselves we should be looking for people who are also interested into that and try to enable changes with bigger group of people in various places of organization...The main take away for me is the understanding that systems of people is the key element in any organization. We can apply all best practices or tools, but the first thing before that is understanding what kind of human systems do we have in our organizations. If we're able to listen and understand that voice we might increase our chances of success.“

Txesk Planells, Agile Coach in Softonic particularly enjoyed Henrik Kniberg’s keynote. Apart from his ability to make the best of things while experiencing lots of technical problems during the talk, the phrase of “Don’t inflict help” struck a chord. Also the real life example of making small changes to other people and how they react was great. He also mentioned the talk from Coca Pitzer “And when the team is not collocated? Can it still be agile? “ as :

“having good takeaways, real examples of how it is possible to work well in remote especially if the team is conscious of the extra effort involved."

I would certainly go back next year the Agile Lean Ireland conference. I found the quality of the talks to be good, interesting and most importantly for me, they made me think about certain elements of my work as Agile Coach. The price was very competitive and it was great listening to another community. As it couldn’t have been any other way in Ireland, the final call to action was to go to the bar and have a pint.

All of the slides and photos are available here.