At the last minute, on a typical warm, sticky Barcelona summer evening in August, I decided to go to...oh, wait a minute, that’s the same line I used from the blog post on a Lean UX talk last year. As it happens, it was exactly the same sticky Barcelona weather in August however it was a Sketch Thinking workshop this time with Jose Berengueres (@harriken) held in Vistaprint offices. Another difference was that Dani and Nino came along to learn how to draw stickmen with me. 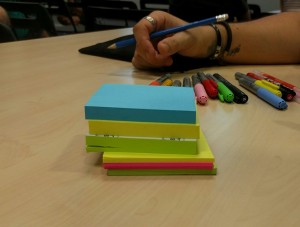 Nino is ready to start

Then we began to draw! After starting with some simple figures, faces and a type form, the tough part arrived surprisingly quickly for most people in the room.

“Only 5 seconds? This is not going to end well” I thought.

“Easy, I’ll draw a heart”. I managed a plausible looking heart in the 5 seconds.

“Ok, I can do a quick Lost in Space type robot”. Just as I was finishing the legs, he fired off another easy one, “Key” which I did quickly and then came...

So I had 5 seconds to sketch “Collaboration” which was the beginning of the end for me and my rapidly diminishing ego. 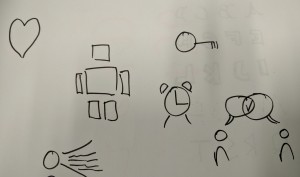 Sketching random words - which one is the robot?

He managed to kick me a couple of more times while I was down with :

I’m sorry, but in 5 seconds there was no hope that I was going to think of a sketch for that. I just wrote the word “Hope”. This is when I realised that thinking I could sketch and sketch thinking were very different concepts.

In the past, I’ve drawn diagrams with arrows, simple shapes and figures to describe concepts, normally to do with Agile (for example), however the difference was clearly in the time pressure to sketch an unprepared concept quickly. I was poor but it felt good to be an amateur again as it’s been too long since I tried something new.

We began to work on the Sketch Thinking practice by listening to a TED talk on multi-tasking. We had to create 3 post-its that described that TED talk and we only had a couple of minutes after watching the video to do it. I’ve to be honest and say it wasn’t easy for me, maybe Dani and Nino found it easier although judging by their faces, and more importantly their drawings, they didn’t find it easy neither. However we got to practice again with the same video several times over which proved to be useful. Also Jose encouraged us to look at our peers’ efforts and steal what we liked.

We all agreed that watching videos was the best practice for sketch noting and something that I’ll try again in the future.

We touched on several other topics including the correct use of shading, gaining confidence by writing 1 to 10 with both hands at the same time as if it were a mirror and most importantly, how to draw baseball caps on the little figures.

It was a good workshop to practice the sketching skills and while staying at home using Jose’s book, I could have done exactly the same, being there in person enriched the experience and allowed me to see other people’s ideas while also strictly adhering to the time limits to ensure optimal practice. One thing that Dani mentioned that would have improved the workshop was if Jose had sketched something “live” and maybe even given an example of him receiving some random words from the crowd and in 5 seconds come up with a sketch :-)

There was one thing that I did not quite agree on, basically when Jose judged people’s sketches. I find the concept of sketch thinking much more like sketch noting - a person uses sketches to take notes rather than words. Therefore the sketches are for their own personal use and the most important thing is that the same person who drew the sketch understands the meaning. It doesn’t matter if another person doesn’t see the significance of a drawing. I guess that was part of the difference between Sketch Noting and Sketch Thinking. I could see the benefit of the critique if you were creating sketches for others, but not for personal use.

All in all, a useful event to practice relatively simple concepts that surprisingly many of us cannot do well. Thank you very much Jose for the workshop and also Antonio from Vistaprint for providing the space!

Here are the links if anyone wishes to see the video of the workshop or go through the slides.

Thank you for such a nice article!

Thank you Antonio for the organisation and facilitation! And I didn’t even mention the beer and crisps :-) 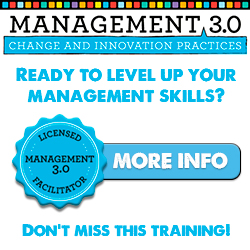